Bob cane to us from an independent rescuer in Brooklyn. He had found Bob on the street where this four month old kitten was trying to survive on his own. He had Bob vetted but asked us to help find a foster where Bob could get more attention. 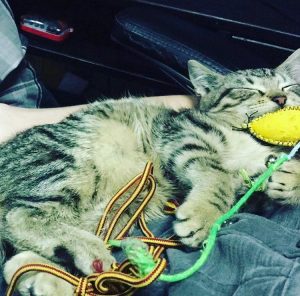 Bob went to a foster home but was very scared of humans and hid often. It wasn’t until another Sarama cat named Sasha moved in the Bob started to feel more comfortable. They’re foster Dad saw how much they adored each other and decided to adopt them both.