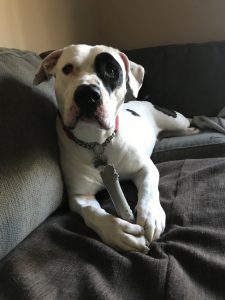 We would like to introduce you to Buddy. I’m While he is officially new to Sarama, he has been living with our director for many months now. He came to her from our friends at Redemption Rescues, Inc. for behavior evaluation and training. He has been recently returned to them for behavior issues. But let’s starts at the beginning. 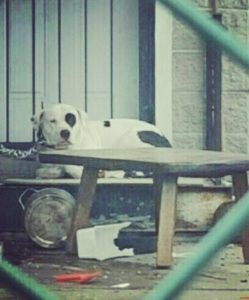 Redemption Rescues rescued Buddy from abusive owners. Buddy was chained up in a back yard in Far Rockaway, NY. A woman who lived in a high rise next door had a perfect view into the yard from her window and witnessed the owners coming out and punching and kicking Buddy in the face. They along with local police went to check on Buddy. The owners were uncooperative and combative and wouldn’t allow them to see or rescue Buddy. Animal cruelty investigations can be long as they have to gather concrete evidence to prosecute and convict. While they were doing that, the owners moved out and left Buddy chained up in the back yard. When they found him, he was starving, terrified and his body was covered with oozing mosquito bites. When they took the chain off him and weighed it, it was almost 10 lbs!

He went straight to the vet for medical treatment and found a wonderful foster for Buddy who ended up adopting him. About a year later she needed to surrender Buddy. She was having personal issues and Buddy was also having high anxiety about meeting any new people. He had been to two different trainers provided by the rescue and while he got better for awhile he wouldn’t revert back to being anxious and uncomfortable with new people and in new situations. 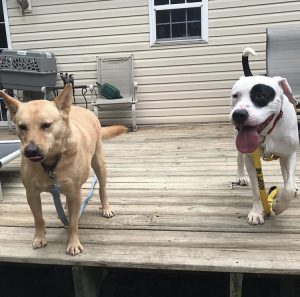 That’s when Buddy came to Sarama’s director. She is also a certified trainer. Since he’s been here, Buddy has come out of his shell. He loves playing with other dogs, any kind of toy, jumping on the trampoline and watching TV on the couch. He has met a few new people and made new friends but the meets have to be carefully managed. Because Buddy is a large dog (a hundred pounds!) and needs to be managed in a secure environment by people who can read his body language , we decided that it was best for Buddy to remain where he is and where he is now comfortable as a Sarama sanctuary dog.

Sometimes a dog’s behavior May suggest a history of abuse but we also have to take genetics into factor if we don’t know. With Buddy, we know for sure that before he was rescued , he suffered mentally and physically.

It’s heartbreaking. Taking in a sanctuary dog is a big undertaking. It’s also a huge financial commitment. Buddy is only three years old and we are committed to him for the rest of his life. He will remain in foster with our director and get all of the love, care and guidance he needs.